Will we be able to fulfill God’s call to make disciples in the midst of an undesirable circumstance? This article is based on a preaching of Pastor Joseph Bonifacio during an online virtual camp with Victory group leaders from ENC Malate in May 2020.

We are going into the third month of the quarantine and as a leader, you are probably asking, “What can we do? There’s no church event where I can bring my friends to, where they can hear the gospel being preached.”

But when we read the Bible, we see that disciples with the Holy Spirit in them would make disciples wherever they were—literally wherever.

Really? Even in a pandemic? How is that even possible?

We will see through the events outlined in Acts 8 that God can do great things through regular disciples, regardless of the situation.

The book of Acts outlines the fulfillment of Jesus’ prophecy when he said, “You will be my witnesses in Jerusalem, in Judea, in Samaria, and to the end of the earth.” Jesus went from a small scale vision of reaching the city of Jerusalem to a seemingly impossible mission of reaching the world.

Throughout the book, we see that indeed, the church started in Jerusalem and the rest of Judea, and then, in chapter 8, it began to spread to Samaria and the rest of the world.

Yet, this did not happen the way the disciples expected it.

Things were going great for the early church in the first few chapters of Acts. Their numbers were growing. They were meeting in the temple courts and praising God together. Different kinds of people were getting saved. The church was socially responsible, mindful of the poor and the needy among them.

But in Acts 7, the anger of the Jews was stirred up against one of the disciples, Stephen, and that led them to stone him to death. In the next chapter, we see this escalate to a citywide persecution in Jerusalem against the church.

And there arose on that day a great persecution against the church in Jerusalem, and they were all scattered throughout the regions of Judea and Samaria, except the apostles. Devout men buried Stephen and made great lamentation over him. But Saul was ravaging the church, and entering house after house, he dragged off men and women and committed them to prison. – Acts 8:1–3

As you read the first part of Acts 8, you’re probably thinking, “Lord, how could You let this happen? Why did You allow them to break up? What did they do wrong?”

Sometimes, I can’t help but think that in our current situation. We’ve had all these plans for our campus ministry. We were just coming from a great outreach season. We had so much going on. How can God let the pandemic happen and affect all our plans drastically?

What we are going through is similar to what happened then. The early church that was able to meet all the time was suddenly scattered all over the place. There may be many reasons God allowed this to happen, but there is certainly one good effect:

Those who were scattered went about preaching the gospel.

Persecution is a negative thing. It is terrible. It is something we hope to never see again. They prayed all the time for the persecution to be lifted. But one of the effects that couldn’t be denied is that people began to share God’s word. People were able to do this, when before they probably did not have the time or the opportunity to do so because the apostles were there to do it for them. But when these regular believers were left on their own, they began to preach the gospel themselves.

This undesirable pandemic is terrible. We didn’t want it to happen. We pray that the virus will go away for good and that the quarantine will be lifted all the time. And yet, we see people taking it upon themselves to share God’s word, because they just can’t bring their friends to the service anymore. They just can’t hope that the campus missionary will go to their campus to preach to their classmates. The responsibility falls solely on them, and God moves powerfully through them.

Undesirable situations lead to unlikely leaders rising up, as we see in the next part of the story.

Now those who were scattered went about preaching the word. Philip went down to the city of Samaria and proclaimed to them the Christ. – Acts 8:4,5

Who was Philip? This is not Philip, the apostle, who Jesus challenged at one point in the Gospels to think about how to feed five thousand people. This is Philip, the evangelist, who was not called that way because he was paid to preach the gospel, but just because that’s what he did as a volunteer. He can probably be compared to an usher or an administrator who always stayed in the background. He did not style himself as a hero. But because of the persecution, he had to run for his life. He was not on a planned mission trip. He found himself escaping to Samaria and what followed were amazing stories of people getting saved wherever he went.

Before this chapter, the stories always revolved around the apostles. In Acts 7, we see that the martyr, Stephen, who preached the gospel as he was being stoned to death, was a volunteer. In Acts 8, we see another volunteer, Philip, preach the gospel to people as he was escaping for his life.

In this time of the pandemic, unlikely leaders will emerge. You may think you’ve never had a role to play. But this situation makes us realize that all it takes is the Holy Spirit moving in us to effectively preach the word to our family and friends. You are not a bench warmer. You are not a fan. You are not part of the audience. You are a part of God’s team.

This is not supposed to add to our concerns and our burdens. But we are supposed to run to God with all the concerns and burdens that we have and as He ministers to us, we will be able to minister to others as well.

Philip’s courage to preach the word led to surprising results.

And the crowds with one accord paid attention to what was being said by Philip, when they heard him and saw the signs that he did. – Acts 8:6

The preaching of the gospel in Samaria and eventually to the rest of the world was the fulfillment of what Jesus prophesied. If not for the vision Jesus cast, all the disciples would be able to see in this situation are the challenges posed by the persecution. And yet the very circumstance that was deemed undesirable and terrible led to Samaritans hearing the gospel and receiving the gift of salvation.

This pandemic is a terrible time for all of us, but I believe that God is doing something and there will be unlikely leaders who will rise up to produce unexpected fruit. There are probably people in your life who you have given up on. You feel like they could never be open to the gospel. And yet, because of our unique situation, you find them having a spiritual hunger that wasn’t evident before. As you allow God to build your connection with them, you will see unexpected fruit being borne.

The Samaritans could not deny the power behind what Philip said and did. When he preached the word, it had power to touch and transform hearts. When he moved in signs and wonders, it had power to prolong and promote life. There was nothing magical behind what he said and did. It was the power of the Holy Spirit manifested in him as he obeyed in faith.

The long history of Christianity in Ethiopia can be traced back to Philip simply staying close to the Ethiopian eunuch he met along his journey, leaning in to give ear to the Holy Spirit for instructions and patiently leading the man to the Lord through their conversation.

Philip was the unlikely leader who produced unexpected fruit as he tapped into the undeniable power of God. He simply went wherever the circumstance brought him, stayed close with the people around him, and obeyed whatever instructions the Holy Spirit gave.

Are you at home? Are you on social media? Stay close and listen to the people around you. Seek the Holy Spirit to give you instructions on what to say and do.

During this undesirable situation, may we find God’s undeniable power producing unexpected fruit in unlikely leaders among us. 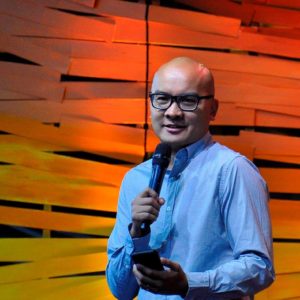